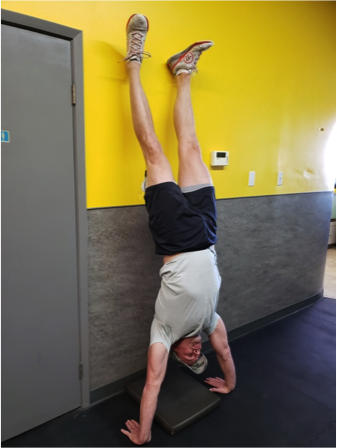 Let me tell you a story about a dear friend of mine, who embodies this to his very core.

John is a straight up boss man.

He owns a VERY successful company, of which he started at the ripe age of 21. Is the father to a beautiful boy, and wife to an incredible lady (I’ve never actually met her, but I can only imagine).

After all of the above have been covered, he makes hitting the gym at least once a day a priority. For his sanity and of course to keep the title of king bicep crease gains.

If you think your life is busy… think again.

Every time he steps into the gym he SHOWS UP. I’m not just talking physically being there.

He’s all in. No matter what. He does his work with such intention – even if it is t-spine windmills and wall slides. Two absolute favourites of his.. eh John?

John’s overhead mobility absolutely sucks.. and I’m only saying this because he would tell you the same, using language a little more vulgar of course.

Flexy is definitely NOT one of his middle names, but perseverance is..

Due to this severe lack in shoulder mobility, he has a hard time bringing his arms overhead, something us anatomy freaks like to call shoulder flexion. And since his shoulder flexion is a liiiitle dysfunctional, standing upside down on his hands is a position that makes him VERRY uncomfortable… so uncomfortable that it makes watching him in that position uncomfortable.. or at least it used to.

Which brings me to the point of all this. John travels A LOT for work. I would say at least every week he is in a different area code, which ultimately means that he spends a loooot of time in hotel rooms and hotel gyms.

Now for those of you who have ever tried to workout in a gym with very limited amount of (heavy) weights and ceilings not much taller than me (I’m 5’2 for reference).. you know this is a very difficult task. 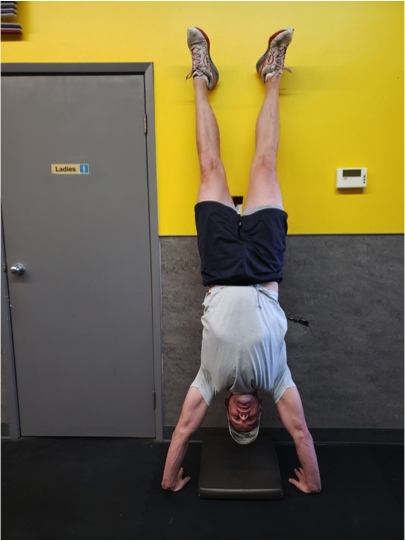 John came to me one day and asked me to create him a program that would help him get closer to his goal of mastering handstand push-ups. But there was one thing. He had to be able to do all of it in a HOTEL ROOM since he was about to be on the road for the next little while.

“Uh John.. do you know how long your legs are?!” was my first thought. But we all know that if there is a will, there is way. Cliché? Yes. True? Also yes.

Who knows if what I came up with was what he was looking for.. but it seemed to have actually worked!! I saw John crush 15 unbroken HSPUs in a metcon not too long ago and it brought tears to my eyes (obviously).

There is something so incredible about watching someone go from extreme struggle and frustration during a movement to complete mastery.

It’s even better knowing he had to work really freaking hard to get there.