Corey started with CFC spring 2015 and has since become an evening regular. Not only have we seen some drastic improvement in this technique and metcon performances but also in his desire to learn some of the more advanced crossfit gymnastic movements – diagnosing the mechanics and then putting them into action.

In addition, Corey is registered to complete in the FrostFit 2016 Crossfit competition and we could be more proud and excited to see him put his enthusiasm and competitive nature into action!

I had a friend in the military back home that did it.  I wanted to try it out, and there was one close by so I thought I’d check it out.

One sentence to describe CFC from your perspective? 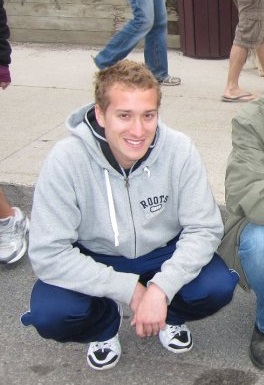 Just improving, especially when it comes to adding more weight.  I never used very heavy weights before, and it’s great being able to get better. Still have a long way to go though.

Well, that I will keep a secret for now but I do accept bribes in cash or rum (preferably Gosling’s Black Seal) that could easily sway my opinion. They are all excellent!

My favorite part of CFC is the variety of exercises.  I get bored easily and enjoy trying/learning new things almost every class.  Oh and I guess the people are “ok” too 😉

What are some of your activities outside of CFC?

My job keeps me busy, but I enjoy trivia/Jeopardy, documentaries, books on financial history/personal finance, and like everybody, a good party.

Do you have any goals set for the near future?

Get on Jeopardy and win some money.

I competed in math competitions in high school, and went to science camp.  My friends never let me forget this.

Corey brings his effort every class. He is his own toughest competitor because he is always pushing himself. He is becoming more and more comfortable with all of the crossfit movements. He is slowly stock pilling a wide Arsenal of gymnastic and Olympic PR’s. Can’t wait to see him compete not only in frostfit but in the open as well. One of my favorite things about Corey is his attitude that he brings each and everyday. He wants to learn and he wants to push himself and he does it all with a great smile. – Coach Jason

My first meeting Corey was in a free trial class, we did the usual “what is CF” and some brief warm up as usual and then went on to introduce the rower. My immediate comment, “So, you’ve been on a rower before…” his reply, “ya, a little.” with a small smirk. Absolutely beautiful movement and stroke efficiency on the rower. I would later learn he’d spent some time in/around water in his younger athletic career. Our workout that day had rowing in it, something short for 3 rounds, he came out round 1 rowing like a 1:35 pace at 100% and hit a massive wall in rounds 2 and 3. We talked about it afterward and he was baffled at this concept of “pacing” during a for-time metcon. Since then, he remains one of our strongest rowers and it’s been awesome to watch him progress and have chats the on the finer points of mechanics of movement, force generation the general physics. A great and enthusiastic personality to have around CFC and a pleasure to coach. Can’t wait to watch him at FrostFit! – Coach Taylor

You can tell this guy is a driven individual. He comes into the gym regularly between different classes to make sure he gets his workouts in consistently and works with a purpose. He truly listens to the coaching cues given to him and responds very well to them – it shows with his improvements in movement quality first off, and secondly with his increased strength and capacity. He pushes himself hard but knows how to walk that fine line of hard work and stupid work. Corey is a super coachable athlete, he believes in the system, and I better quit burning my time writing this thing or he is going to be “fitter” than me before I know it. Glad to have you apart of CFC bud! – Coach Matt
Corey’s a down to earth, quiet guy who comes in and gets the work done. You can tell this guy has a great work ethic, during metcons he’s bullheaded and keeps pushing through until he’s complete. He’s methodical in his training methods, meaning he doesn’t jump head first into heavy weights or skills he hasn’t achieved yet, he takes his time and listens to the coaches ques, and treads cautiously until he knows he’s moving well. These are the reasons why I think Corey should be athlete of the month, he’s a great role model for the community, and I’m excited to see what he can do in January @ FrostFit! – Coach Shane