Micky has been a part of the community since February 2015 and was CFC’s first member. His continued support, commitment to fitness and progress in strength, movement and capacity over the last 4 years cannot be overstated. There’s not a soul in the gym that’s done more Hero Workouts or rowed more meters/kilometers then he, and he’s reaped the rewards with steady streams of PRs, times-of-the-day and RX+ workouts without waver. As such, we’ve recently dubbed him Micky “The Hero” Furlong.

Micky “The Hero” Furlong recently completed a 30-day hot-yoga and nutrition challenge during which he didn’t miss a step, rep or workout at CFC that really goes to show his commitment and determination when he sets his mind to something. Always quiet and focused during the workouts and chatty as anyone thereafter, Micky’s friendliness, calm demeanor, humility and willingness to always we up for a challenge never ceases to amaze us as coaches.

From all the CFC coaches, we want to thank and acknowledge Micky for his continue commitment not just to CFC but to living a healthy and fitness-fueled lifestyle. This is well earned and a long time coming.

What got you into Crossfit, how long have you been doing it and what keeps you coming back?
I originally got into crossfit because I was tired of doing my own programming and I was going into a crossfit gym to see the owner for programming and nutrition help so eventually she convinced me to try a class. I loved it, the hardest part was getting through the door the first time. That was back in 2013, and I keep coming back for the metcon punishment. 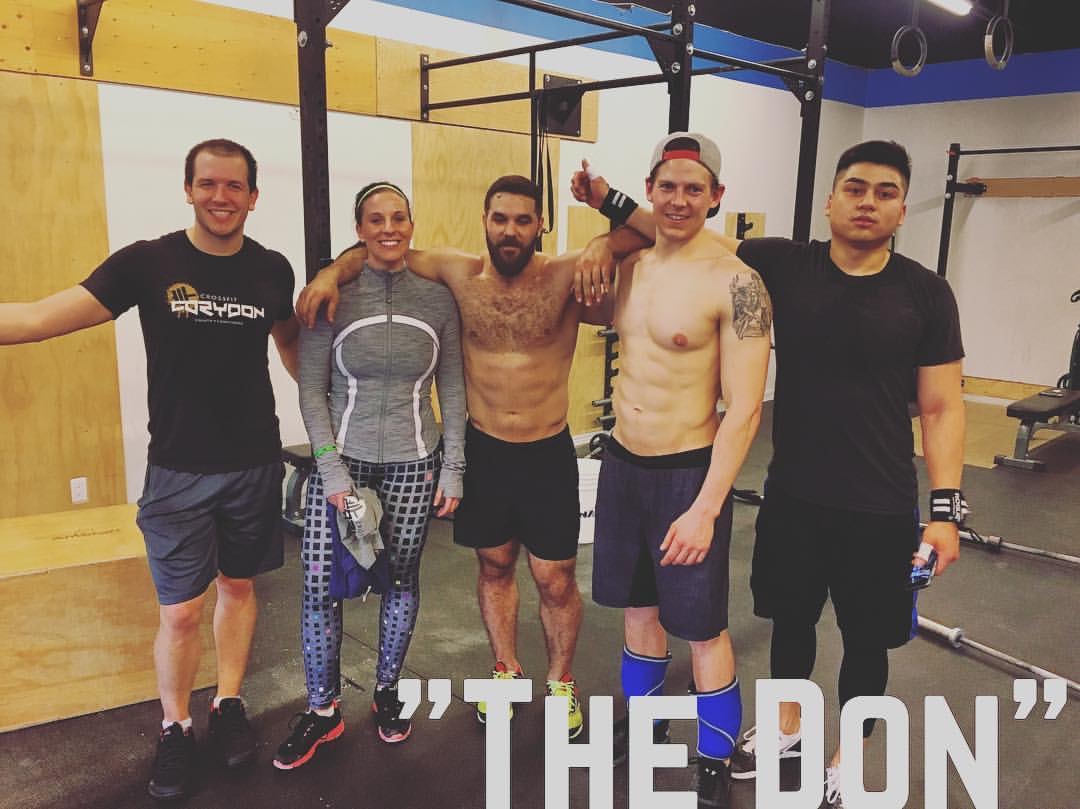 I just finished a 30 day yoga challenge. So for the past month most of my free time has been spent at Crossfit and hot yoga.

It’s a great place to get a good workout in with good people.

Going in on Sundays and dying during hero wods at noon. 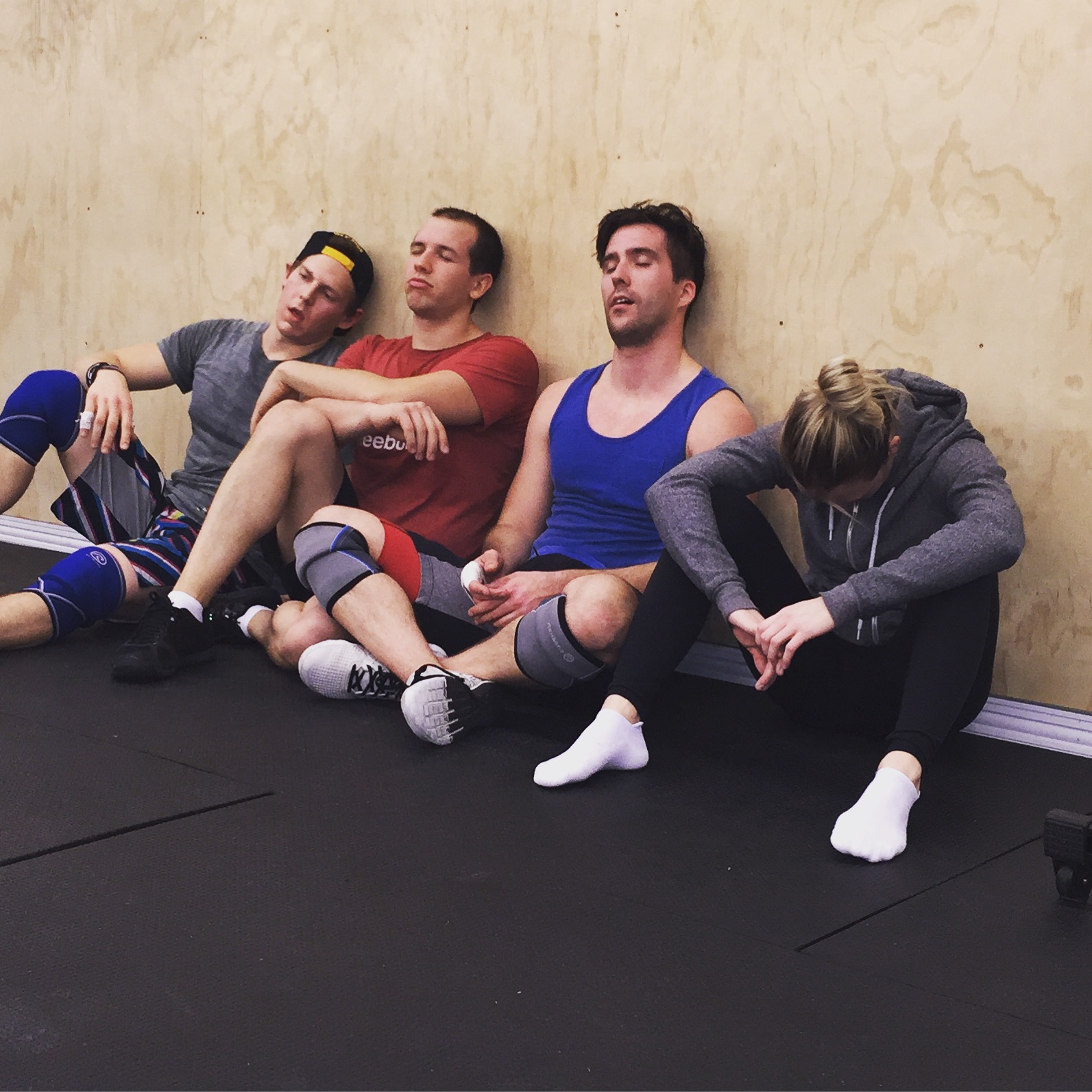 Least favorite is double unders, it’s bad enough I suck at them but having to walk around all day with lash marks on my arms as proof is just insult to injury haha.

Wolverine. His story is one the first ones I heard from the comic book world and it is still my favorite.

Finishing the 30 day yoga challenge and hitting my weight-loss weight of going from 195-185 in 5 weeks. It was hard, I love cotton candy ice cream.

Taylor- The OG. Taylor is always good at pointing out little tidbits of a hero wod I am about to do that I never considered. Always helps a lot. Plus he is good at pitting Toogood and I against one another for metcons.

Shane – I’ve been doing some of these Olympic movements so long that sometimes I get lazy or forget certain parts of them and Shane is always good at pointing it out and it makes me focus on that again.

Lisa – Very good at breaking down the movement of the day. Helps to hear again what everything should be during the movement.

Lyndsay – Has a ton of experience with competitive crossfit and is always great to talk to for strategy advice.

Tomy- She’s very good at motivating everyone during the metcon.. she sure can make a lot of noise for such a small person haha. Plus she is always good for an Eminem track during the metcon (or 5).

Jason – Jason is the master of breaking down how many reps he will do his metcon sets into. I’m pretty sure before Jason my plan was to just “go until I’m tired”. It has helped a lot.

Michelle- Michelle is great resource when it comes to barbell and more recently she reminded me that even if you’re not having a heavy/PR day, it’s still good to log it for tracking- which is something I had been slacking on.

Tyler- The best person to go to when I need to mix up the bro fitness or need a unique new accessory work.

After the yoga + weight-loss challenge I immediately set a goal to continue to go to yoga and crossfit almost as much as during the challenge to cut down to <178lbs by April 25th (my birthday). Which will be the lightest/leanest I have ever been.

I was once almost recruited into a biker gang.

Micky “Cindy (Mary)” Furlong is an OG at CFC. He is consistent at his training and he is always up for a good conversation that is until his headphones go on, than you know he is ready to destroy a metcon. He has a great balance to his approach to crossfit, he is technically sound and proficient in a lot of movements and has a great engine. He is always throwing workouts my way and I am always amazed at his times. On top of that he is a fantastic runners and knows how to pace very well. It is always a delight to have him in class and an even bigger delight for me to go head to head with him, he usually pushes me out of my comfort zone. He is also a sticker for performing all movements as prescribed, no short cuts with him and he will call you out of you try to take them lol. Mickey keep up all the hustle and whatever zone your headphones put you in keep going there – Coach Jason.

I have known Micky “The Bench” Furlong as long as I have known CrossFit. He was in my first classes and on the day I am about to die, he will be my last call to hit a quick workout just before it’s time to go… And I will destroy him.
I’ve had the pleasure of witnessing and being a part of countless workouts, lifting sessions and travels abroad with him over the years and his appetite for both food and suffering never cease to amaze me. I’ve seen him eat a family size chicken pot pie and roll in to do a 40-min Hero Workout just “because”.
He’s undergone quite the transformation in lifestyle, skill/strength and physically capacity over the last 4 years that often flies somewhat under the radar. Going from a few pull-ups and some moderate barbell strength to the person we see today.. able to consistently hit/exceed his 1-5 rep maxes on any given day, RX any hero workout and top our leaderboards… is no small feat and requires discipline inside and outside of the gym. He challenges himself and everyone around him EVERY DAY and that I am personally great-full for. I owe many workouts and some suffering to simply trying to one-up him any chance I get.. every in a bicep-burpee workout.. dude, that was your shot!
In all seriousness though, the energy and focus he brings into class is incredible. Always curious, always willing to help others learn and never wavering from his authentic self and goals.. his presence on the leaderboard and around the community is felt by all. – Coach Taylor

Micky “Diane” Furlong, otherwise known as the guy with no middle name was CFCs first member. Since then, he has increased his attendance each year as well as his love-hate relationship with double unders. Micky is the 4pm’s class most dedicated attendee and Wodify’s own sign-up authority. Don’t you dare show up to class without signing up in Wodify first… he might just hit you over the head with a PVC. Also know that if you’re the 5th person to sign up for the class… you won’t be seeing Micky there. He has a thing for the number four apparently…

Micky is known for his quirky personality and his ability to tell the most detailed (drawn-out) stories.. I advise against striking up conversation if you have somewhere to be in the next 26 minutes.

Happy 4-year CFC anniversary Mickyyyy – maybe you’ll finally beat me in a metcon next year… providing you don’t turn into one of those Yogini’s.- Coach Steph

Micky ‘attendance officer’ Furlong. Longest standing CFC member who would not want you to know exactly how great his attendance record is (almost the best… if it weren’t for Peter).

On a quest to come up with his own nickname, replace long lost Tim, and best all his favourite hero workouts Sundays @ 11:45am. Absolutely no earlier, absolutely no later. He has a hero wod list you can check out, of which it’s schedule is ruled by the season (January is not ideal for running wod’s, we can all agree). A ridiculously large (10#!! no jokes) burrito is #goals to get him through this Sunday wod.

If you would like recommendations on what headphones to wear during group workouts -> Micky is your source. Fun facts, only guy I know that drinks a quad espresso post workout, not pre. He loves sharing the barbell with his closet 4pm bro, Mike. But would’t dare challenge Mike (& definitely not Taylor) to a workout, females are the only opposition to test. He is diligent about his schedule, his warm up/cool down routine, and keeping track of his friends. Secret power = yoga (really a yogi at heart).

Micky is small town vibes, big smiles, and few words (unless you are one on one, lookout). Strike up a conversation by asking him about his fav girl, Tally. Never change Mic. CFC would not be the same! – Coach Sara

Micky “Karen” Furlong: I’d like to commend Micky for his diligent and hard work ethic. Without him and role he fills in this gym I don’t know who would lead the 4 o’clock class and ensure that anyone who dare attend is signed up. Micky is a leader in attendance and sets a great example by showing up early and getting in a good warmup. Mick’s crushing a yoga challenge and showing great results. Keep up the good work! #gateKeeper (Ps. $5 bucks to anyone who can find out his actual middle name) – Coach Tyler

Micky “Fran” Furlong is the CFC OG Member. Dude always has a plan when he comes in, and typically smashes every workout without complaint. The guy could of probably made athlete of the month every year at CFC, so it’s about time he gets his spot on the athlete of the month page! Congrats Micky, your work ethic in the gym is contagious. – Coach Shane

Micky “Christine” Furlong. – Coach Linz
Micky “Murph” Furlong brings character to CFC. He keeps you honest and isn’t shy when it comes to sharing “Micky’s fun facts” with you. He shows up early and always takes the time to properly mobilize and cool down. CFC wouldn’t quite be the same without him. – Coach Lisa 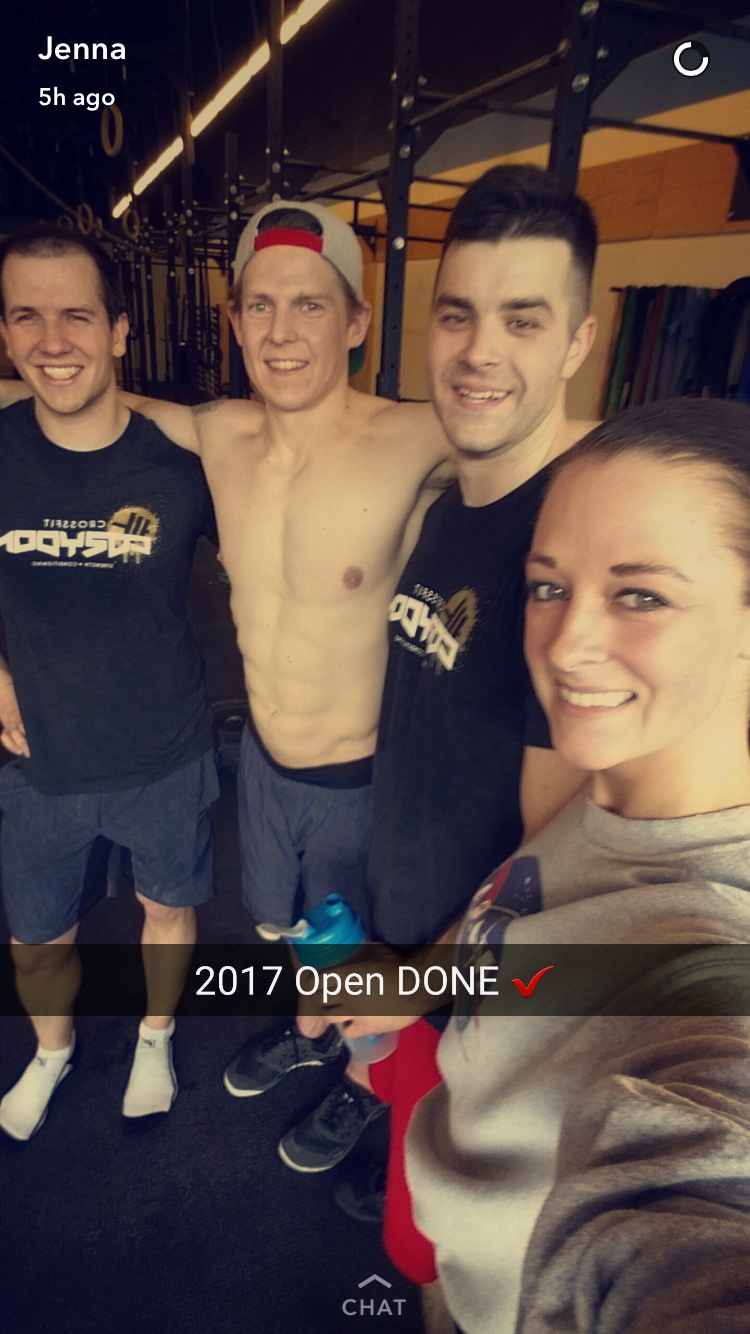